skip to main | skip to sidebar

A few years ago, during the heyday of shows like Trading Spaces and Changing Rooms, they were always making upholstered storage cubes. I figured I already had storage BINS, so why not throw some kind of cover on them and call them ottomans? Christine from Christine Sews recently had the same idea and asked about my version, so here it is!

As it turned out, Isabella was sure I'd made them for her, so I indulged her by locating them near windows. Now she has two cushy perches from which she can gaze upon her bird friends. Even when I pulled this one away from the window to take pictures, she insisted on demonstrating its real use. 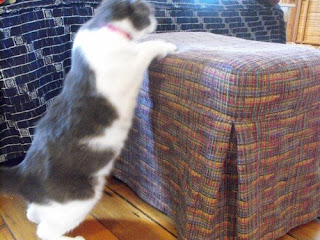 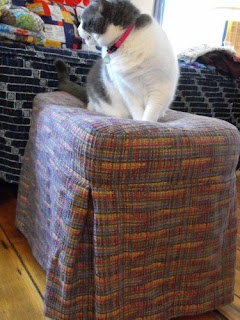 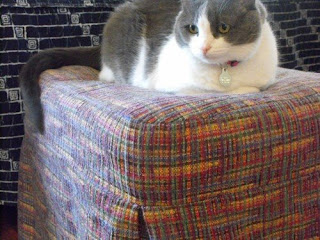 Ugh, I hadn't noticed how faded this one's gotten. Well, ignore that. Just look at how it's made. 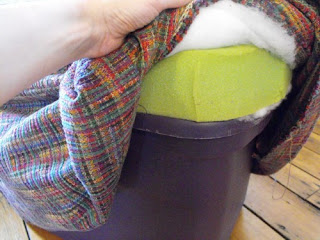 I started with a thick piece of foam, cut to fit the top using an electric carving knife. Stick that to the top of the bin, using heavy duty adhesive. I left that up to my husband, and he used something he brought home from the hardware store. Right before pulling on the slipcover, I wrapped batting around the foam, just to smooth out any sharpish edges.

The cover itself was pretty self-explanatory. Use the top of the bin as a pattern for the top. Then you need a long skinny piece for the "cushion" part. The skirt is just another long strip which I pleated at each corner. The only tricky part was hiding the seam in one of the pleats. I made these before I officially learned to sew, so they're obviously not that complicated!

Of course the best thing about these is you can load them up with junk and no one has to know! 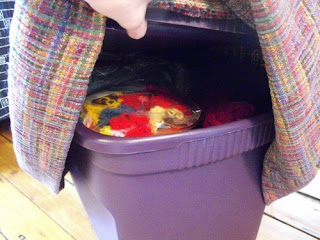 I love your version, and the cat demonstrator too! I thought for certain that my cat would adorn my new seats. But he doesn't. He prowls past suspiciously.

Thanks for the link and the photo sharing. Now I have many new repurposing ideas for foam and duct tape and fabric, oh my.

Isabella...Queen of all she surveys!

I like your idea very much. A big improvement on plastic bins.

Now that is Clever!! I never would have thought of covering a tote like that. What a great idea!

Brilliant!! I love that your kitty claimed it for her own. Now if only I could teach my kitties not to spray the upholstered furniture! (Two male cats with constant territory battles...)

I posted a link to your tutorial on Craft Gossip Sewing Blog: http://sewing.craftgossip.com/cool-idea-diy-storage-ottomans/2009/05/12/
--Anne

My Darling Petunia is incredibly inventive, ingenious, talented...I could go on! AND I love her to death!

ridiculously clever idea! Kudos to you for coming up with it....and your kitty assistant is just wonderful!

Oh what a way to hide a storage bin!!!

Can you sit on it? I mean is it strong enough to hold more than a child?

Love this! You have me thinking...

RootsandWingsCo--I am the husband in this house and while I wouldn't suggest sitting on them for very long or regularly, I have taken a seat on one to put on shoes, etc...and I am no delicate flower!

I love it ! Very creative ! That's actually really cool Thanks.

This reminds me of how I made my dining table! I live in a small 1 br apartment, no real dining room, just an "area" - my dining table is actually a large steel trash can with a piece of plywood over the top, and a tablecloth. I used "marble" spray paint on the can so it looks like a stone column. Two chairs, it's perfect for a single person, or one guest. And lots of storage inside the can!

I love this! Brilliant!

I was looking for something inexpensive and practical as graduation gifts for students headed for college. This is perfect! Thanks.

Look Who Else Reads This Stuff!

Wanna See My Other Blog?